Germany’s gold investment market has boomed in the past 10 years. Faced with successive financial crises and loose monetary policy, German investors have turned to gold to protect their wealth. Last year, almost €7bn was ploughed into gold investment products in Germany. Encouragingly, however, we see room for further growth.

By 2009, Germany’s gold investment market had become one of the largest in the world. Annual bar and coin demand quadrupled, shooting up from 36 tonnes in 2007 to 134 tonnes in 2009. The gold-backed ETC market registered impressive growth, too. Assets under management (AUM) jumped from zero at the start of 2007 to around 36 tonnes two years later and, in the years that followed, more gold-backed ETC products entered the market.

Such a transformation prompts two major questions: why has the market boomed, and what does the future hold?

The global financial crisis brought gold to the attention of German investors at large. While the world fretted about Lehman Brothers, German investors worried about the state of their own banking system and people feared for their savings. On 5 October 2008, the government guaranteed all private bank accounts, to prevent a run on the banks and a collapse of the banking system. This was part of a wider problem: banks across Europe were being bailed out by taxpayers.

In Germany, Mario Draghi’s actions have a particular resonance. Investors there have an acute awareness of the wealth-eroding effects of financial instability. 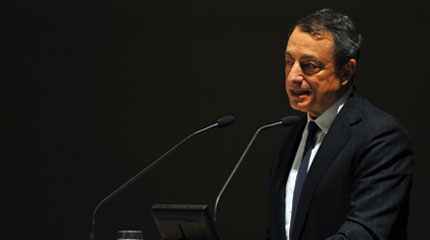 The bailouts were double-edged. While banks stayed afloat, the countries that propped them up struggled, calling into question some of the most basic investment theses. The European sovereign debt crisis, for example, indicated that government bonds, which had been considered risk-free, were anything but.

European monetary policy became looser in response. In 2012, with the European project and its currency under pressure, Mario Draghi, president of the European Central Bank, pledged to do “whatever it takes to preserve the euro.” Faced with low inflation and anaemic economic growth, the ECB launched an aggressive quantitative easing programme and slashed deposit rates into negative territory.

In Germany, Draghi’s actions have a particular resonance. Investors there have an acute awareness of the wealth-eroding effects of financial instability. Hyper-inflation in the 1920s lingers on in the collective memory but, perhaps more importantly, German investors have seen fiat currencies come and go: in the past 100 years, the country has had eight different currencies. So it should come as no surprise that, when faced with such an unsettling economic backdrop, investors turned to gold to protect their wealth.

In 2016, €6.8bn was ploughed into German gold investment products. Demand for bars and coins is consistently above 100 tonnes annually and a vibrant domestic ETC market has developed.

A changing landscape has encouraged this trend. Banks have been a long-standing presence in Germany’s gold market, acting both as wholesalers and retailers. But the market has evolved. As some banks pulled out of precious metals in the early 2000s, entrepreneurs stepped in to fill the void, making it easier for retail investors to buy gold. Today, estimates suggest that there are between 100 and 150 non-bank bullion dealers nationwide. Many are quite small, but two of the foremost players are Degussa, whose brand is exceptionally strong in Germany, and Pro Aurum, a leader in the online market.

While gold-backed exchange-traded products emerged on the global stage in 2003, it took several years before they were introduced in Germany. Xetra-Gold, launched in late 2007, was the first offering from Deutsche Bank and was soon followed by Börse Stuttgart Securities.

In recent years, these investment vehicles have benefited from the negative yields generated by government bonds and similar assets. Since the start of 2016, investment in German-listed gold ETCs has skyrocketed. AUM have more than doubled, growing by 150 tonnes. At the end of September 2017, total gold holdings of ETCs in Germany totalled almost 250 tonnes.

The rationale behind this transformation is fairly clear. With its long history as a store of value independent of the financial system, gold is a natural investment for many German investors. In 2016, market research group Kantar TNS surveyed more than 2,000 German investors on behalf of the World Gold Council, revealing that:

When asked why they invested in gold, 57% of bar and coin investors said it was to protect their wealth and 28% said it was to make good returns in the long-term. In essence, these German investors see gold as fulfilling an important long-term, wealth preservation role in their portfolios. So much so that the amount of gold bought per head by German investors in 2016 was greater than in either of the two gold powerhouses: India and China.

There is latent demand for gold among retail investors, despite the market’s dramatic growth over the past 10 years.

In recent years, the country’s economy has performed well. In August 2017, unemployment fell to 5.6%, its lowest level since reunification in 1990. Wage growth in 2017 has averaged around 4.4%, comfortably above the long-average of 2.6%. And people have positive expectations for the future: the European Commission’s measure of German households’ confidence in their financial situation for the next 12 months recently hit its highest level on record. Nonetheless, the Kantar TNS research implies there is latent demand for gold among retail investors, despite the market’s dramatic growth over the past 10 years. This suggests potential for further growth in demand for gold bars, coins and ETCs.

There is more uncertainty when considering institutional investors. It is likely that a significant proportion of ETC AUM is from long-term, strategic investors using gold as a hedge against unforeseen events. But some of the recent growth in these products may also have been driven by tactical investments in response to negative yields. Should yields edge higher – and in the case of the two- and five-year bunds, move into positive territory – some of these investors may be tempted to shift back into other assets.

Institutional investor behaviour, however, is far from clear cut: investors face risks on several fronts. Recent Bank of America Merrill Lynch Fund Manager surveys, for example, highlight that European investors see policy mistakes from the Federal Reserve (Fed) or the ECB as the most likely tail-risk event in the coming months, and around 30% of those surveyed believe Fed balance sheet reduction will be a risk-off event, causing a fall in both global bond and stock prices. In such a scenario, it is easy to see why German institutions would like to remain invested in gold.