Sections:Transparency – at least as valuable as gold

Germany has the second largest gold holdings in the world, with reserves amounting to almost 3,400 tonnes. The Bundesbank has been in charge of these reserves since 1951, when Germany first began to accumulate gold. Over the past five years, the Bank has taken a series of steps to increase transparency around Germany’s gold holdings. Carl-Ludwig Thiele, member of the executive board of the Bundesbank, reveals the motivation behind this transparency campaign and the measures taken to achieve it. 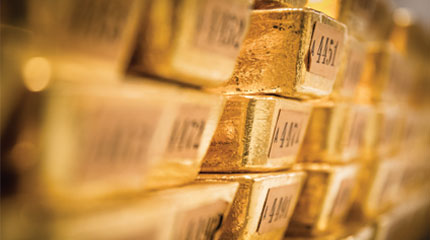 At the Bundesbank, we are tasked with ensuring price stability and have a variety of monetary policy tools to deliver it. We do, however, have another vital tool at our disposal: our word. As an independent body, free from political influence we have gained public confidence and our word is implicitly trusted.

Confidence, once gained, is priceless. Just like a currency, this confidence must be continually reinforced, and the Bundesbank has always fought for just that – through words, argument and, increasingly, transparency, particularly in relation to our gold holdings.

Germany’s gold reserves were largely accumulated between the 1950s and the early 1970s, when the country experienced rapid economic growth and developed a substantial current account surplus. Initially, the gold remained in its original locations, stored in central banks around the world.

Today, our gold reserves are held in three locations: the Deutsche Bundesbank in Frankfurt am Main, the Federal Reserve Bank in New York and the Bank of England in London. The storage facilities at these sites satisfy a number of essential criteria, including cost efficiency, the ability to liquidate the reserves at short notice and security, which is particularly high at all three locations.

Transporting several hundred tonnes of gold is a complex task and the decision to proceed took careful thought. Following the financial and euro crisis, general awareness of gold as an investment has risen considerably. As a result, interest in the Bundesbank’s gold reserves has increased markedly, among policymakers, the Federal Court of Auditors and the public at large. The overwhelming response to the Bank’s open days in 2014 and 2017 underlined this fascination, when individual visitors queued for up to two hours just for the chance to hold a gold bar in their hands.

Against this background, the Bundesbank was increasingly questioned about the location, security and availability of Germany’s gold. As a direct result, our Executive Board resolved to become more transparent about the reserves and to relocate them... 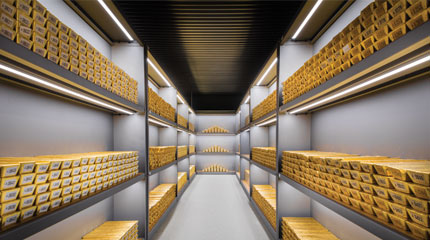 As a first step, the responsible Executive Board member broke with established practice and, in the autumn of 2012, disclosed the exact volumes of gold held at each storage location. That was when the Board opted to relocate a substantial proportion of this gold to Germany. The public was informed of this decision at a press conference on 16 January 2013. A number of gold bars were on display, several of the Bank’s verification processes were demonstrated and the Bundesbank announced that it would start to relocate 674 tonnes of gold, held in vaults at the Federal Reserve Bank in New York and the Banque de France in Paris. By 2020 at the latest, just over 50% of Germany’s gold reserves were to be stored in Frankfurt.

The availability of reserve assets like gold strengthens public confidence in the stability of a central bank’s balance sheet. As at 31 December 2016, gold holdings made up around 68% of the Bundesbank’s reserve assets.

The decision to transfer the gold was prompted by a number of factors: a desire to increase confidence among the German public; changes in geopolitical circumstances – such as the fall of the Iron Curtain – and the fact that the Bundesbank had available storage capacity in Frankfurt. In this context, it is important to note that, up until 1997, the Bundesbank stored only 77 tonnes of gold in Frankfurt.

In a second step towards increasing transparency, at the beginning of 2014, the public was informed of the previous year’s transfers and, in February 2017, we announced that the transfer of gold from the Federal Reserve Bank in New York had been successfully completed. Six months later, we revealed that the transfers from the Banque de France in Paris had been completed too. At press conferences held to unveil these developments, journalists were given an up-close look at some of the gold bars that had been brought to Frankfurt from both New York and Paris.

In a third step towards increasing transparency, the Bundesbank Executive Board commissioned a film on the transfer and storage of Germany’s gold, released in 2015.

As another milestone and a global first, an additional fourth step towards increasing transparency was taken with the publication of a list of all German gold bars, totalling around 270,000 in number. The Bundesbank has now published this roughly 2,400-page list three times since October 2015, even though it involved a series of significant challenges. There is no ‘blueprint’ for inventory lists of gold holdings and, in 2015, virtually no central bank in the world had ever released such a list.

“The devil is in the detail” – as they say – and we had to focus painstakingly on the detail to draw up the gold bar inventory list. During this time-consuming process, one thing became clear: rules are very helpful in making transparency a reality. The London Bullion Market Association (LBMA) offers an appropriate set of rules. Elsewhere however, there is little consistency. Even though various online gold forums claim that there is a ‘standard’ for gold bar inventory lists, determined by the LBMA, this only relates to commercial weight lists for gold deliveries to storage facilities in London.

Looking back, the transparency campaign has taught us a number of useful lessons.

First, the availability of reserve assets like gold strengthens public confidence in the stability of a central bank’s balance sheet. As at 31 December 2016, gold holdings made up around 68% of the Bundesbank’s reserve assets. This has a significant impact on public perception so it is essential that we constantly maintain and develop a relationship of trust with the general public. This was and continues to be the primary goal of our transparency campaign.

There is one question that we cannot answer, even though it has been asked time and again: what routes and means of transport were used for the gold transfers? 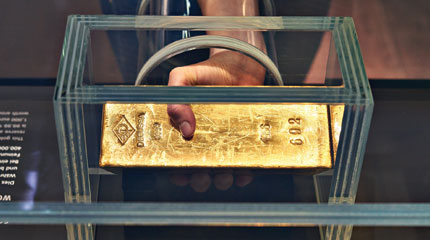 However, making transparency a reality requires both time and human resources. Over the past five years, our dialogue with both the general public and policymakers on the topic of the Bank’s gold reserves has intensified considerably. Experts, politicians and citizens increasingly appreciate our openness around Germany’s gold reserves but it takes time to answer everyone’s questions, however legitimate they are. In the Money Museum, which reopened at the end of 2016, the Bank also offers visitors the opportunity to handle a gold bar for themselves. This gold bar is no larger than a one-litre carton of milk, but weighs roughly 12.5kg and is worth more than €400,000.

There is one question that we cannot answer, even though it has been asked time and again: what routes and means of transport were used for the gold transfers? In this matter, as in cash transport, the security of staff and assets always takes precedence over the need for information and transparency. For this reason, the Bundesbank has consistently refused to answer any such questions, and will continue to do so in the future.

Ultimately, it is evident that central banks, with their more ‘sober’ attitude towards gold, can help to rationalise the discussion about gold. But we can do this most effectively by reinforcing our position as trusted authorities towards the general public – and that is best achieved by taking appropriate steps towards increased transparency.