Why Chinese investors could benefit from gold

Why Chinese investors could benefit from gold

Gold is a proven investment asset, capable of reducing portfolio risk and boosting returns. As such, Chinese investors could benefit from allocating some of their portfolio assets to gold, as World Gold Council Director of Investment Fred Yang explains.

China’s investors have faced a challenging time this year, hit by falling prices in both equity and corporate bond markets. China’s leading index, the CSI 300, has underperformed the MSCI World Index by around 20% since 1 January 2018. At the same time, the credit spread between AA+ corporate bonds and the quasisovereign China Development Bank bond has ballooned to more than 200bps, highlighting concerns about prospects for domestic companies (Chart 1). The CFETS RMB Index has also taken a tumble. Designed to reflect the RMB’s performance versus a basket of currencies, it fell from a peak of nearly 98 in the 2nd quarter of this year to below 93 in early August.

There are many reasons for this widespread underperformance. On the domestic front, deleveraging and tighter rules on shadow banking have played an important role. But China has also been buffeted by problems on the international stage, including the Federal Reserve’s desire to shrink its balance sheet and the escalating trade war with the US.

The situation puts China’s investors in a difficult position. Equity and bond futures markets do not provide effective hedging tools, as they are comparatively shallow and restricted. And currency weakness is a further problem, particularly for onshore investors.

In such an environment, the benefits of gold investment stand out, for four distinct reasons.

First, gold has a low and sometimes negative correlation with other asset classes (Table 1). For this reason alone, many institutional investors include a modest allocation to gold in their portfolio. Today, gold’s lack of correlation with conventional assets is particularly significant because markets are increasingly inter-connected and volatility is a persistent concern. Diversification into assets such as gold is widely accepted as a smart way to mitigate risk.

Second, gold can act as an alternative currency. A prolonged period of monetary easing has caused a sharp increase in money supply and reduced the value of fiat currencies. Over the past decade, for example, the US dollar, euro and RMB have depreciated sharply against gold (Chart 2). The dollar and the euro have more or less halved in value against gold since June 2007, while the RMB has fallen by around a third.

Chart 2: Currencies have depreciated over time relative to gold

Chart 2: Currencies have depreciated over time relative to gold

Third, gold has no credit risk. It does not constitute an obligation of a government so it is not a liability. As such, ownership of allocated physical gold protects investors from credit risk, providing considerable comfort during times of crisis.

If a Chinese institutional investor makes a 6% allocation to gold, it would reduce the volatility of their portfolio, increase the sharpe ratio from 0.46 to 0.54 and still keep the target return of 5%.

Finally, the gold market is both deep and liquid. Investors can access gold through contracts on the Shanghai Gold Exchange, the Shanghai Futures Exchange and the four ETFs listed separately on Shanghai and Shenzhen Stock Exchanges (Chart 3). The combined average daily trading volume across these products between January 2017 and June 2018 totalled RMB 54.1 billion (bn), making it easy for investors to gain exposure to gold.

Note: The average daily trading volume of HuaAn Gold ETF is illustrated here as it has the highest one among the four China Gold ETFs.
Source: Wind; World Gold Council

The wealth preservation benefits that gold can bring would suggest that institutional investors can usefully allocate some capital to gold. But how much is the right amount? A recent study used an optimisation simulation process developed by asset management specialists New Frontier Advisors. The study incorporated data from January 2007 to December 2017, representing the major asset classes owned by Chinese investors (Table 2). It then considered the optimal gold allocation for portfolios with different nominal target returns. The results were noteworthy, suggesting that the optimal allocation to gold increases from 3% to 6% as portfolios’ nominal target returns increase from 4% to 5.5% (Chart 4). 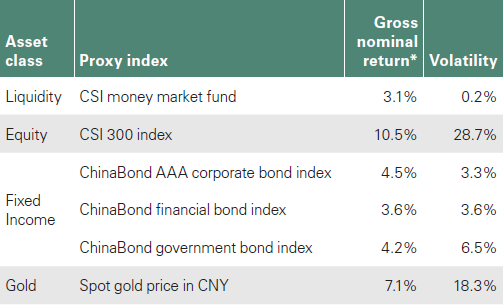 The analysis further shows that if a Chinese institutional investor makes a 6% allocation to gold it would reduce the volatility of its portfolio, increase the sharpe ratio from 0.46 to 0.54 and still keep the target return of 5% (Chart 5).

Diversification into assets such as gold is widely accepted as a smart way to mitigate risk.

The analysis is thought-provoking. But it also echoes the findings of studies we have conducted. Whether institutions are invested in US-, European- or UK-listed assets, research indicates that most well-balanced portfolios would benefit from a modest allocation to gold. The same is true for investors exposed to Chinese assets. Gold has a low correlation with other mainstream assets and boosts risk-adjusted returns. As such, it has the potential to be a rewarding asset for Chinese investors.

Chart 5: Performance of an institutional portfolio with or without gold

Chart 5: Performance of an institutional portfolio with or without gold