China’s gold mining industry is one of the largest in the world – with growing influence both at home and abroad. Zhang Yongtao, Vice Chairman and Secretary General of the China Gold Association, suggests the industry could become even more dominant, if certain steps are undertaken.

China’s reserves of unmined gold are deep and growing. By the end of 2017, the country had identified gold resources and reserves of 13,195.60 tonnes (t) (Chart 1), a substantial figure in itself and an increase of 8.45% year-on-year.

China is also a world leader in gold production. Having overtaken South Africa in 2007, China has been the largest gold producer in the world for 11 years in succession, producing 426.14t in 2017, equivalent to just over 13% of the global market.

Exploration and production is spread across 3,389 gold mining areas, managed by around 400 gold mining companies. Within this group, the top 13 account for the lion’s share of production, taking 59.77% and 41.04% of finished gold and mined gold output, respectively. And the top four – China National Gold Group (‘China Gold’), Shandong Gold, Zijin Mining Group and Shandong Zhaojin Group – are particularly dominant.

Gold mines are concentrated in the east of the country; most are small to medium sized and grades are comparatively high. Technological breakthroughs have also paved the way for deep prospecting, delivering further increases in reserves. Today, new gold reserves in the Jiaodong area of Shandong province amount to 1,840t, while identified gold reserves total nearly 4,000t.

The domestic market faces certain challenges, however. Gold production fell 6% from 2016 to 2017, hit by lower gold prices, increasing safety and environmental regulations and rising costs. In 2017, for example, the comprehensive production cost was RMB200.38/g (approximately US$914/oz), a year-on-year increase of 2.15% (Chart 2). 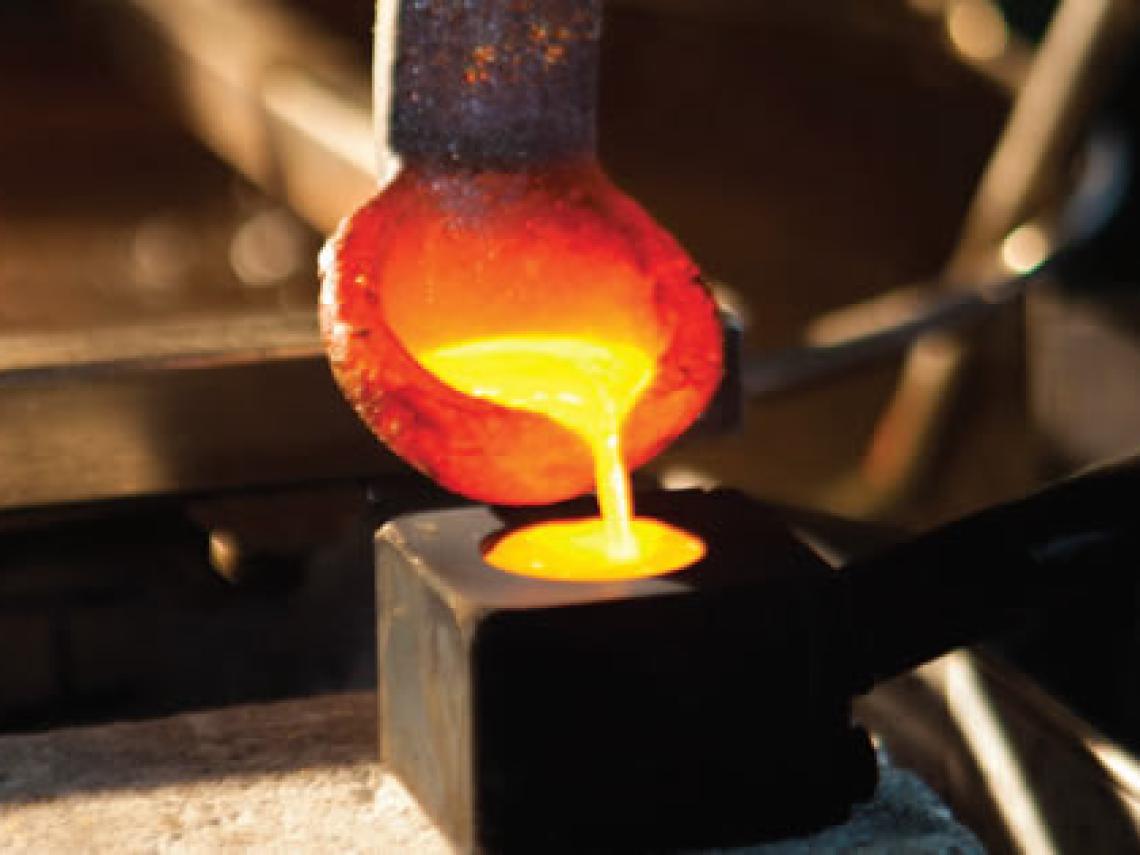 More positively, there is an increased focus across the industry on identifying quality assets, not just domestically but overseas too. Leveraging its position as “the largest gold smelter in the world,” the industry is actively seeking international partnerships and joint ventures. This outward focus stems partly from an increased recognition of the benefits to be gained from cooperation with overseas peers, but it also reflects the role of gold within China’s “Belt and Road” (B&R) initiative.

Last year, for instance, China imported gold raw materials of 854,150t, with a value of US$1.7 billion (bn), including the purchase of precious metal ore sands and concentrates from 55 regions and countries – 19 of these countries are within the B&R initiative area.

Overseas investment has been building steadily as well. Chinese gold companies have made international investments of nearly US$4bn since 2011, boosting their gold reserves by more than 800t. Looking ahead, more such investments are expected. A quick glance across the industry highlights this trend.

Zijin Mining Group, for example, has acquired numerous overseas assets: Jilau and Taror Gold Fields in Tajikistan; Levoberejny Field in Kyrgyzstan; Norton Gold Field in Australia; Porgera Gold Field in New Guinea; and Kolwezi Cooper Field and Kakula in the Democratic Republic of Congo. Taken collectively, these transactions increased Zijin’s overseas gold output to 19.30t in 2017, such that the group’s international production is now 16.46t higher than its domestic output.

State-owned enterprises and private companies can join forces to support the Belt and Road initiative, seeking out countries with rich gold resources and working with them to develop mines and enhance production.

Shandong Gold has also expanded overseas, acquiring a 50% interest in Argentina’s Veladero Gold Mine Project for US$960 million. In 2017, this project produced 12.98t of gold. Elsewhere, Buriuc Gold Mine and Kulu Gold Mine projects in Kyrgyzstan are under construction, having been acquired by China Gold; while another recent transaction, the Soremi Project of Congo-Brazzaville, has moved smoothly into production. Shandong Zhaojin makes “going global” a priority too, having invested in listed companies in Australia, set up a fund platform in Canada and acquired a gold mine project in Ecuador.

China’s gold industry is not merely focused on expansion by acquisition; it has also kept abreast of market trends, exploring innovation and development both domestically and overseas. Over the years, the industry has expanded to cover the entire value chain, encompassing exploration, mine production, processing, distribution, sales, trading and investment.

Today, many of the larger gold companies, such as China Gold, Shandong Zhaojin, Shandong Gold and Zijin Mining Group, are keen to extend their reach and drive growth.

As China’s economy continues to grow and technological innovation remains a priority, the outlook is bright. But certain steps need to be taken if the gold industry is to maximise its potential.

Second, the industry would benefit from structural reform. Underperforming businesses need to be shut down, while a round of consolidation would improve productivity and remove excess capacity. Inefficient supply should be reduced, environmental considerations should be increased, risk management policies should be improved and companies should remain keenly aware of market developments at home and abroad.

The industry should also focus on cooperation along the value chain, with stronger connections between business and finance, national and international markets and upstream and downstream. This would foster growth and encourage innovation to the benefit of the entire industry.

Third, the industry needs to work together to drive improvements in areas such as human resources, R&D and sustainability. These are common issues, which may be best tackled by the industry as a whole.

Fourth, the industry needs to work on a long-term “green mining” strategy and improve its approach to social responsibility. Principles and environmental standards need to be upheld, resource recovery should be enhanced, emissions controlled, governance strengthened, and improvements delivered across a wide range of areas, such as education and training, occupational health, accountability and safety.

Fifth, the gold industry is already starting to cooperate as part of the B&R initiative. But there is real potential for further gains, through integration at home and development abroad. To that end, state-owned enterprises and private companies can join forces to support the B&R initiative, seeking out countries with rich gold resources and working with them to develop mines and enhance production.

China’s gold industry is already in a strong position. But it could become even stronger. International growth, technical innovation and an increased focus on environmental, social and governance issues will help the industry to become a true world leader with global market influence.