Gold prices down, local premium up

Gold prices fell in September. The LBMA Gold Price AM in USD and the Shanghai Gold Benchmark Price (PM) in CNY declined by 4.6% and 4.3% respectively last month. The rising interest rate, outflows from global gold ETFs, and a stronger dollar all contributed to gold price weaknesses in September.

The average monthly Shanghai-London gold price premium reached US$7.5/oz in September, US$1.7/oz higher m-o-m, rising for the third consecutive month. China’s wholesale physical gold demand increased ahead of the traditional National Day Holiday sales boom in October, driving up the local gold premium as a result – you can find more detail in our analysis below.4 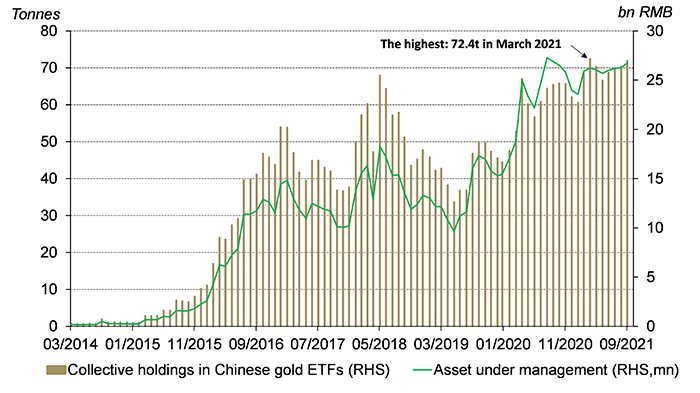 Turbulence in the local stock market might be a key factor broadening gold ETFs’ appeal in September. Delta variant outbreaks in various cities, power rationing, and weakened economic growth all led to a volatile stock market: the 4% decline in the Shanghai Composite Stock Index during the second half of the month almost wiped out its early gains. In the meantime, we believe the 4% retreat in the local gold price also prompted some investors either to enter the market or to increase their strategic gold ETF exposure.

Gold withdrawals from the SGE rose to 191t in September, 27% higher m-o-m and 63% higher than 2019. First, the seven-day National Day Holiday in early October has been a major sales focus for Chinese jewellery retailers, leading to higher replenishing volumes and wholesale demand in September. Second, more and more jewellery manufacturers choose to showcase their new products or offer attractive deals around mid-September at Shenzhen Jewellery Fair or their own tradeshows. And these promotional efforts usually attract retailers nationwide, driving up physical gold demand in the upstream as a result. 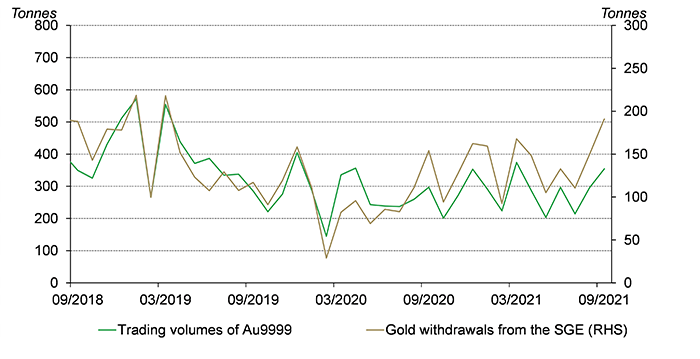 China’s gold imports in August amounted to 76.9t, 10.3t higher m-o-m, in line with the August 2019 level. After a seasonally weak Q2, China’s gold demand tends to pick up, resulting in a higher appetite for gold imports. This trend is especially evident in August and September, for the reasons stated above. 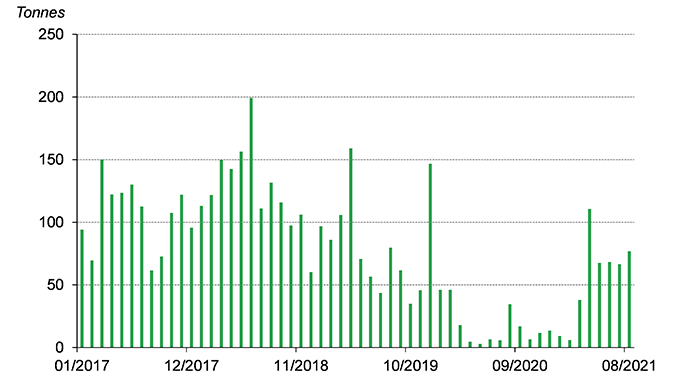 Slowing economic growth might be supportive for gold’s investment demand in China. Amid factors such as power cuts and outbreaks of the Delta variant , the manufacturing Purchasing Managers’ Index (PMI) dropped to 49.6 in September, falling below 50 for the first time since March 2020. Meanwhile, the Producer Price Index (PPI) continued to surge in September, recording its largest y-o-y gain on record. Also, growth in retail sales kept slowing in recent months. With China’s supply side being restricted and demand facing challenges, stagflationary pressure might surface. 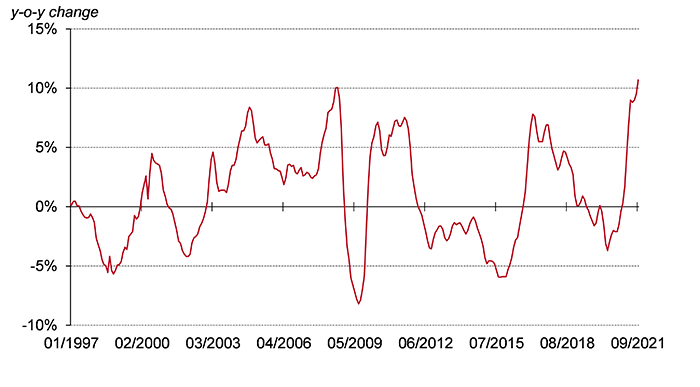 Being a key non-RMB asset, gold’s relative independence from China’s economic changes and its strong performances during stagflationary periods in China might attract more local investors.

The National Day Holiday kicked off Q4 to a strong start for China’s gold jewellery demand. According to the Shanghai Gold Jewellery Assocation, consumers bought gold jewellery worth a total of RMB938mn in Shanghai between 1 and 7 October, 65% higher y-o-y and above the 2019 level. A lower yet stable gold price, the surging popularity of Heritage gold jewellery, and the reallocation of travel budgets amid strict border controls all contributed to the gold jewellery sales boom. 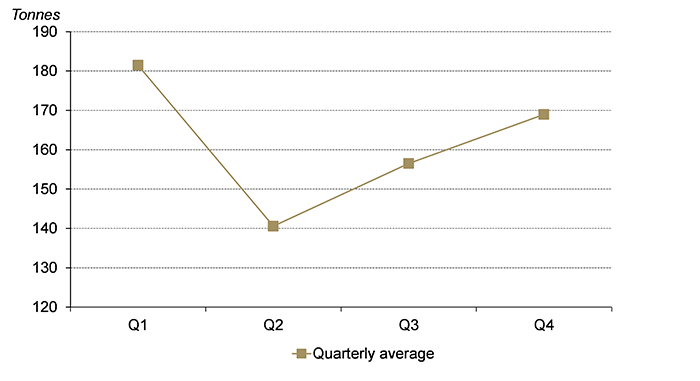 Based on quarterly averages of China's gold jewellery demand between 2010 and 2019; 2013 excluded as seasonality was distorted.

3Please note that the inflow/outflow value term calculation is based on the end of period Au9999 prices in RMB and the USD/CNY rate.

4The 2021 National Day Holiday started on 1st October and ended on 7th October.