The World Gold Council announces the appointment of David Harquail, President and CEO of Franco-Nevada Corporation, as its new Chair. Mr Harquail succeeds Randall Oliphant, who has served as Chair for the past four years.

The World Gold Council welcomes Resolute Mining as a Member

The World Gold Council, the market development organisation for the gold industry, welcomes Resolute Mining Limited (“Resolute”) to its Board of Members. Resolute is one of the fastest growing producers listed on the Australian Securities Exchange and has continuously been mining and producing gold for 25 years. Resolute is an experienced and active explorer, developer, operator and innovator, with long life mines in southern Mali and Queensland, Australia and has recently been awarded two prospective large-scale exploration concessions in Egypt. 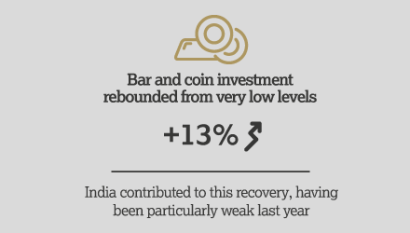 The LME (London Metal Exchange) and the World Gold Council have today confirmed that LMEprecious will launch on 10 July 2017, as planned. All preparations are now complete with regulatory go-ahead also received.

The World Gold Council welcomes Newcrest Mining as a Member

Newcrest Mining (“Newcrest”) has re-joined the World Gold Council, the market development organisation for the gold industry. Newcrest is the largest gold producer listed on the Australian Securities Exchange and one of the world's largest gold mining companies with mines located in Australia, Papua New Guinea, Indonesia and in Côte d’Ivoire.

Global gold demand rose 2% in 2016 to reach 4,309 tonnes (t), the highest level since 2013, according to the World Gold Council’s latest Gold Demand Trends report. This was largely driven by inflows into gold-backed Exchange Traded Funds (ETFs) of 532t, the second-highest year on record, as investors responded to concerns over future monetary policy, geopolitical uncertainty and negative interest rates. 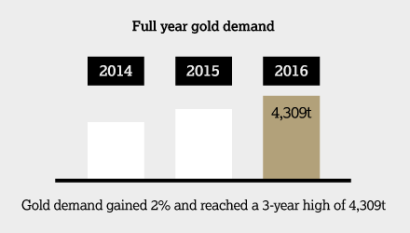 The World Gold Council today launched the report titled ‘India’s Gold Market: evolution and innovation’. This report explains the entire supply chain for India’s gold market– from imports and recycling through to consumer demand – and how it is likely to develop in the coming years. It also provides an overview of existing gold-related policies and how they have evolved over recent years.

Launch of the AAOIFI Shari’ah Standard on Gold, developed in collaboration with the World Gold Council

The Accounting and Auditing Organisation for Islamic Financial Institutions (AAOIFI) and the World Gold Council are delighted to announce the issuance of ‘Shari’ah Standard No. 57 on Gold and its Trading Controls (“the Standard”). The Standard deals with the Shari’ah rulings for gold in its various forms and categories, the Shari’ah parameters for gold transactions and the rulings for gold-based financial products in institutions.