Global gold demand reached 4,345.1 tonnes (t) in 2018, up 4% on 2017 and in line with five-year average demand of 4,347.5t, according to the World Gold Council’s latest Gold Demand Trends report. The annual increase was driven by a multi-decade high in central bank buying and accelerated investment in bars and coins during the second half of the year. While annual inflows into exchange-traded funds (ETFs) were down 67% in 2018, demand was boosted in the final quarter by inflows of 112.4t.

Central banks added 651.5t to official gold reserves in 2018, up 74% on 2017 and the second highest yearly total on record. Net purchases jumped to their highest level since the end of US dollar convertibility into gold in 1971, as a greater pool of central banks turned to gold as a diversifier.

ETFs and similar products saw only moderate inflows of 68.9t during 2018, down 67% on 2017. Stock market volatility and signs of faltering economic growth in key markets fuelled a recovery in Q4 2018, with inflows growing to 112.4t from 32.5t in the same period last year. However, Europe was the only region to see net growth over the year as a whole.

2018 saw marginal gains in the volume of gold used in technology, up 1% year-on-year, although this was tempered by a Q4 slowdown. After healthy gains during the first three quarters of 2018, a combination of slowing smartphone sales, the US-China trade war and mounting uncertainty over global economic growth contributed to a 5% decline in Q4, to 84.1t.

“Gold demand rose in 2018 and, although the US dollar gold price was down 1% over the year, it outperformed many other financial assets. Worries about a slowdown in global growth, heightened geopolitical tensions, and financial market volatility saw central bank demand hit its highest level since Nixon closed the gold window in 1971, the volume of gold in European-listed ETFs reach a record high, and annual coin demand leap 26%.

But some of these factors may prove to be headwinds for some parts of the market. Jewellery and technology demand slowed in Q4 as consumer confidence waned in many markets.

I don’t see any of the risks that investors and central banks are worried about fading anytime soon and I expect gold to remain an attractive hedge in 2019.”

The key findings included in the Gold Demand Trends Full Year 2018 report are as follows:

The Gold Demand Trends Full Year 2018 report, which includes comprehensive data provided by Metals Focus, can be viewed at http://www.gold.org/research/gold-demand-trends and on our iOS and Android apps. Gold Demand Trends data can also be explored using our interactive charting tool http://www.gold.org/data/gold-supply-and-demand/gold-market-chart.

The World Gold Council is the market development organisation for the gold industry. Our purpose is to be the global authority on the gold market, provide industry leadership, and stimulate and sustain demand for gold.

We develop gold-backed solutions, services and products, based on authoritative market insight and we work with a range of partners to put our ideas into action. We provide insights into the international gold markets, helping people to understand the wealth preservation qualities of gold and its role in meeting the social and environmental needs of society. 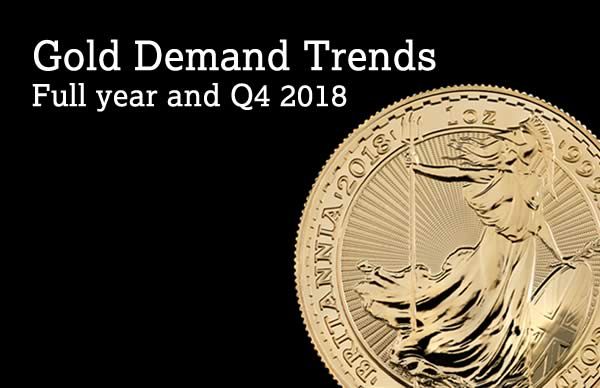