The gold price surged as the UK surprised the world by voting to Leave the EU.  We expect gold inflows to accelerate as geopolitical and market uncertainty rises.

The gold price surged to US$1,315.50/oz on June 24, following the announcement of the referendum. Gold was up 4% from the day before, and 24% higher since the beginning of the year. The pound sterling fell to a 31-year low and world equity markets plummeted.

With Britain voting to exit the EU, we expect to see strong and sustained inflows into the gold market driven by the staggering level of protracted uncertainty that investors now face.

The Bank of England has said that it stands ready to take whatever action is necessary, a mantra that is likely to be repeated by other central banks. In practice, this could mean interest rates move further into negative territory in parts of the world, another positive for gold. Central bank action has already capped the gain in other safe haven assets, such as the Swiss franc, with the Swiss National Bank intervening early on Friday. 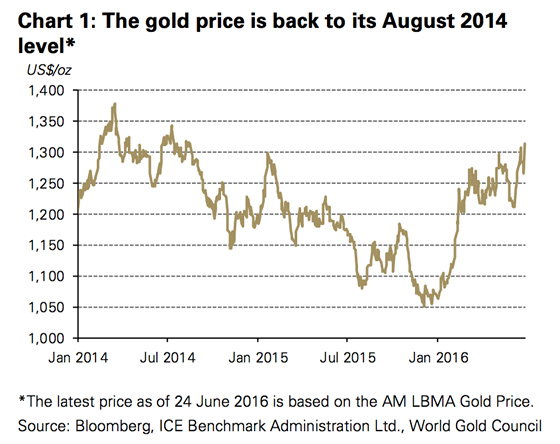