The Global Financial Crisis had a profound effect on markets, industries and policymakers worldwide. It also prompted a significant and sustained shift in demand for gold, as World Gold Council Chief Market Strategist John Reade explains.

2018 was an important year for anniversaries: a century since the end of the Great War and the Spanish influenza pandemic; 80 years since Kristallnacht; and 50 years since the assassinations of Martin Luther King and Robert F Kennedy. Financial markets, however, with their usual shorter-term perspective, have focused on the 10th anniversary of the failure of Lehman Brothers, as it appeared to mark the epicentre of the Global Financial Crisis (GFC). There have been acres of news articles – and gigabytes of blogs, tweets and LinkedIn posts – about the cause of the crisis. I don’t intend to rehash these comments but I would highlight two recent contributions.

First, Dr Paul Fisher, a senior figure at the Bank of England for more than 26 years, makes several insightful observations on the subject in this edition of Gold Investor.

Second, Mike Silva, former Chief of Staff to Tim Geithner of the New York Federal Reserve, gave an excellent presentation titled Inside Perspective on the Financial Crisis and the Lessons Learned at the LBMA/LPPM Precious Metals Conference in Boston in October 2018. (The presentation and a video interview are available on the LBMA website.)

Focusing on how gold performed during and after the crisis is instructive, however, and it is also worth noting some of the structural changes to the gold market that took place as a consequence of the GFC.

The collapse of Lehman

Lehman Brothers failed on 15 September 2008. How did gold fare throughout the crisis? Chart 1 shows no sign that gold moved rapidly higher from July 2008 to July 2009. In fact, gold fell in the fourth quarter of 2008,  as the dollar strengthened and gold was used as a source of liquidity (and sold). Although disappointing to many observers at the time, we have seen this happen elsewhere: when risk aversion strikes, investors’ first instinct is to sell assets and head to the haven of the US dollar.

Image: Lehman Brothers company sign at Christie’s auction house in London. The sign was sold as part of the 2010 ‘Lehman Brothers: Artwork and Ephemera’ sale. 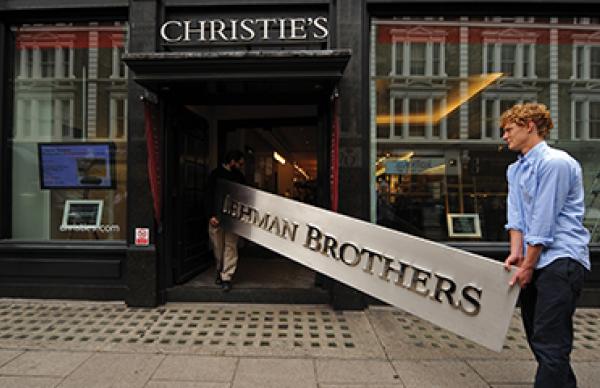 By March 2009, gold was comfortably above its pre-crisis level and went on to make further strong gains. This was not just a consequence of the US dollar weakening.

A crisis-driven major move into gold usually occurs only when investors and savers start to look for alternatives to the US dollar, fuelled by fears of US dollar weakness, inflation or about the very fabric of the financial system. And that is exactly what happened following the GFC. By March 2009, gold was comfortably above its pre-crisis level and went on to make strong gains throughout the second half of 2009, 2010 and most of 2011.

This was not just a consequence of the US dollar weakening. Investors and speculators were also expressing their concerns about the consequences of quantitative easing and other radical monetary policy moves of that time. As a result, gold performed well in many currencies, as the chart of gold in euros shows (Chart 2). Interestingly, gold’s high in euros occurred in 2012 rather than in 2011. That was when the currency weakened as the GFC started to worry investors in European assets, especially those with Italian and Spanish exposure.

By 2013, however, attitudes were beginning to shift. As the US and other economies continued to recover and there was no sign of an imminent surge in inflation, investors took profits and cut long positions, especially in 2013. The price then fell further in 2014 and 2015, before gold posted positive returns in 2016 and 2017.

The GFC had a profound effect worldwide, precipitating economic recession, soaring unemployment, foreclosures and bankruptcies. It also changed some markets dramatically. Banking is not the same industry as it was. Today it is more tightly regulated, with larger capital buffers, tightly limited risk-taking ability and an explosion in the numbers of compliance staff. Lenders are still making GFC-related writedowns and some countries are still struggling with an overly indebted banking system.

Gold has become a more mainstream asset – the proportion of demand made up by investment has increased substantially and apparently sustainably.

The gold industry has changed considerably too. Aside from inflows and outflows into gold-backed exchange-traded funds (ETFs), the bar and coin market in the US and Europe has seen a marked and sustained increase in demand, as shown in Chart 3.

Chart 3: Bar and coin demand strengthened in US and Europe*

Chart 3: Bar and coin demand strengthened in US and Europe*

Central banks have changed tack too, reversing a long-standing selling tendency and collectively buying gold as a source of return, liquidity, diversification and credit risk reduction, as shown in Chart 4.

This trend of central banks buying gold has accelerated in recent years. Around 20 central banks have added gold to their reserves since the start of 2017 and today, this is one of the most interesting trends in the gold market. At the World Gold Council, we believe there are five reasons why central banks are showing an increased interest in gold:

The geographical breakdown of gold consumption has also changed substantially over the past decade, as gold demand has moved ‘West to East.’ Emerging markets have become much more important consumers of gold, with China and India now making up more than 50% of global consumer demand and other emerging markets increasingly important, even as the US, Western Europe and Japan have become less significant consumers.

So where do we stand now, and where to next?

There is no doubt that gold has become a more mainstream asset than it was before Lehman failed – the proportion of demand made up by investment has increased substantially and apparently sustainably.

And, although the gold price has underperformed other assets in the past few years, especially US equities, that’s probably what we should expect after arguably the longest US equity bull market in history. However, with growing indications that the lengthy, cyclical economic recovery from the Great Recession is approaching its end, and with US equity valuations still elevated even after the volatility seen at the end of 2018, it is probably a great time to think about diversifying some portfolio holdings into gold. Gold’s behaviour throughout the GFC demonstrated its strength as a diversifier. There is no reason to believe this would not be the case in a future economic slowdown, even if another financial crisis does not materialise.