While the average gold price in Q1 was 13% higher y-o-y, it declined by 4% q-o-q.1 The opportunity to buy at lower prices, relative to the highs seen last year, boosted consumer demand, particularly as many markets continued to emerge from lockdown and economic recovery lifted sentiment.

Bar and coin investment of 339.5t (+36% y-o-y) was buoyed by bargain-hunting, as well as by expectations of building inflationary pressures.

Growth in consumer demand was offset by strong outflows from gold-backed ETFs (gold ETFs), which lost 177.9 in Q1 as higher interest rates and a downward price trend weighed on investor sentiment.

Gold used in technology grew 11% y-o-y in Q1 as consumer confidence continued to recover. Demand of 81.2t was just above the five-year quarterly average of 80.9t.

The 23% y-o-y decline was due to strong outflows from global gold ETFs in Q1 and reduced levels of net buying by central banks.

Western outflows outweighed Asian inflows as ETF investors both responded and contributed to gold’s performance, driven by higher rates and a stronger dollar. 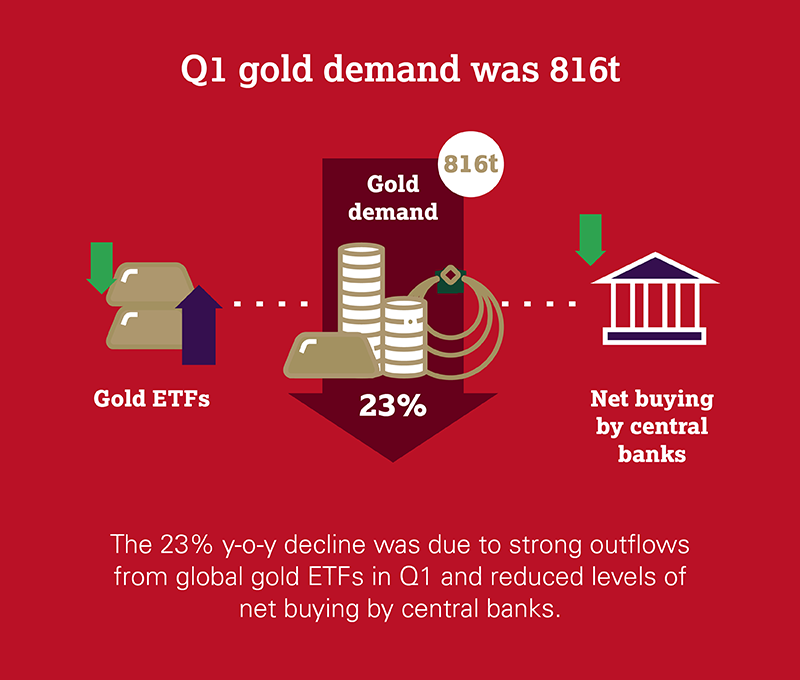 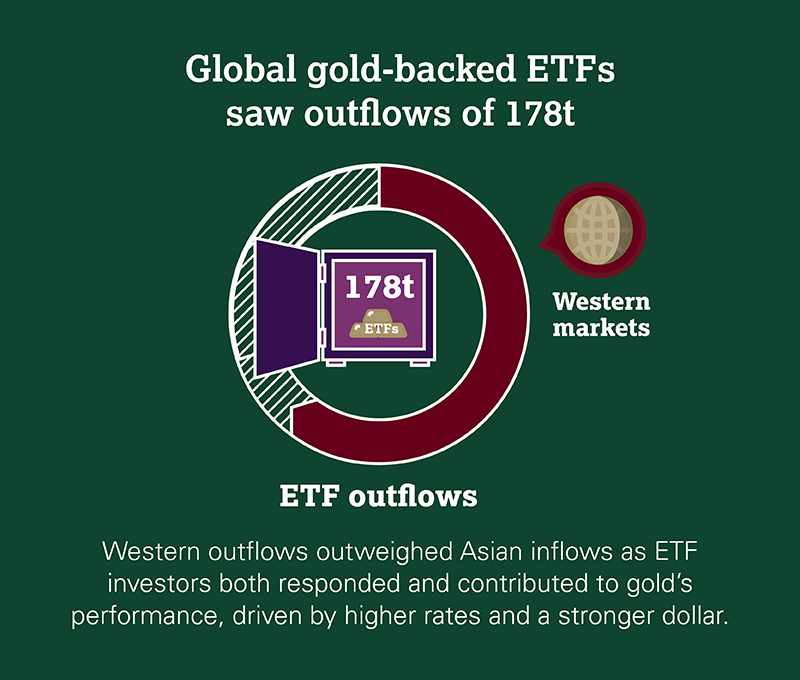 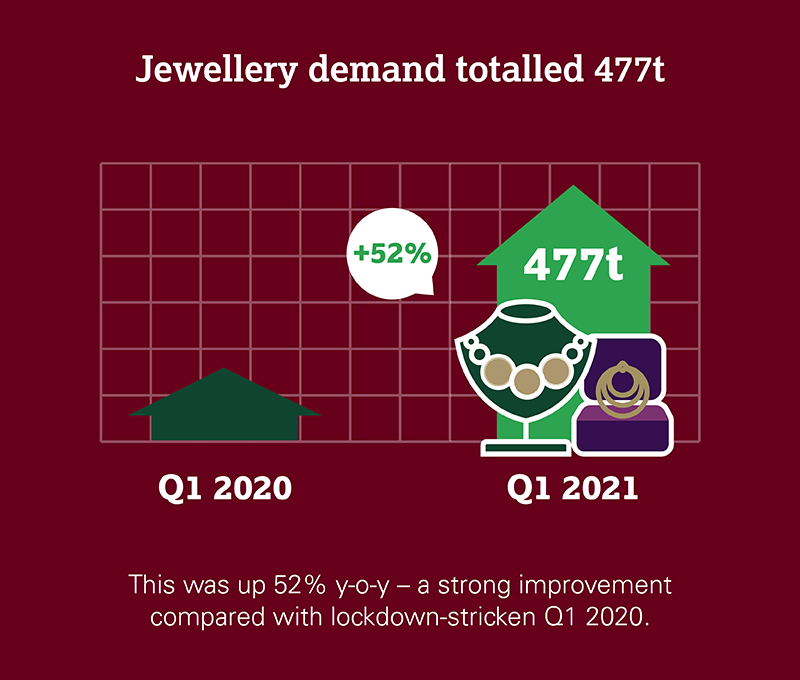 The US dollar gold price fell by 10% during Q1. The recent downward trend was fuelled in part by ETF outflows and a reduction in net long positioning in the futures market, but strong consumer demand helped to provide support.

Demand for gold bars and coins saw a third successive quarter of growth. Investment in these products reached 339.5t – the highest quarter since Q4 2016.

Jewellery demand staged a strong recovery from lockdown-stricken Q1 2020. But it remained relatively subdued on a historic basis – 6% below the five-year quarterly average of 505.9t.

Total supply of gold fell 4% y-o-y in Q1. Mine production growth ws outweighed by a fall in recycling, largely in response to weaker gold prices.

Any references to LBMA Gold Price are used with the permission of ICE Benchmark Administration Limited and have been provided for informational purposes only. ICE Benchmark Administration Limited accepts no liability or responsibility for the accuracy of the prices or the underlying product to which the prices may be referenced. All third-party content is the intellectual property of the respective third party and all rights are reserved to such party.

Reproduction or redistribution of any of this information is expressly prohibited without the prior written consent of World Gold Council or the appropriate intellectual property owners, except as specifically provided below.

Use of any statistics in this information is permitted for the purposes of review and commentary in line with fair industry practice, subject to the following pre-conditions: (i) only limited extracts may be used; and (ii) any use must be accompanied by a citation to World Gold Council and, where appropriate, to Metals Focus, Refinitiv GFMS, or other identified third party, as their source.

World Gold Council does not guarantee the accuracy or completeness of any information and does not accept responsibility for any losses or damages arising directly or indirectly from the use of this information.