Gold demand fell 1% in 2019 as a huge rise in investment flows into ETFs and similar products was matched by the price-driven slump in consumer demand.

2019 was broadly a year of two distinct halves: resilience/growth across most sectors in the first half of the year contrasted with widespread y-o-y declines in the second. Global demand in H2 was down 10% on the same period of 2018 as y-o-y losses in Q4 compounded those from Q3, notably in jewellery demand and retail bar and coin investment. Central bank demand also slowed in the second half – down 38% in contrast with H1’s 65% increase. But this was partly due to the sheer scale of buying in the preceding few quarters and annual purchases nevertheless reached a remarkable 650.3t – the second highest level for 50 years. ETF investment inflows bucked the general trend. Investment in these products held up strongly throughout the first nine months of the year, reaching a crescendo of 256.3t in Q3. Momentum then subsided in Q4, with inflows slowing to 26.8t (-76% y-o-y). Technology saw modest declines throughout the year, although electronics demand staged a minor recovery in Q4. The annual supply of gold increased 2% to 4,776.1t. This growth came purely from recycling and hedging, as mine production slipped 1% to 3,436.7t.

The net result was a marginal 1% decline in annual demand to 4,356t. 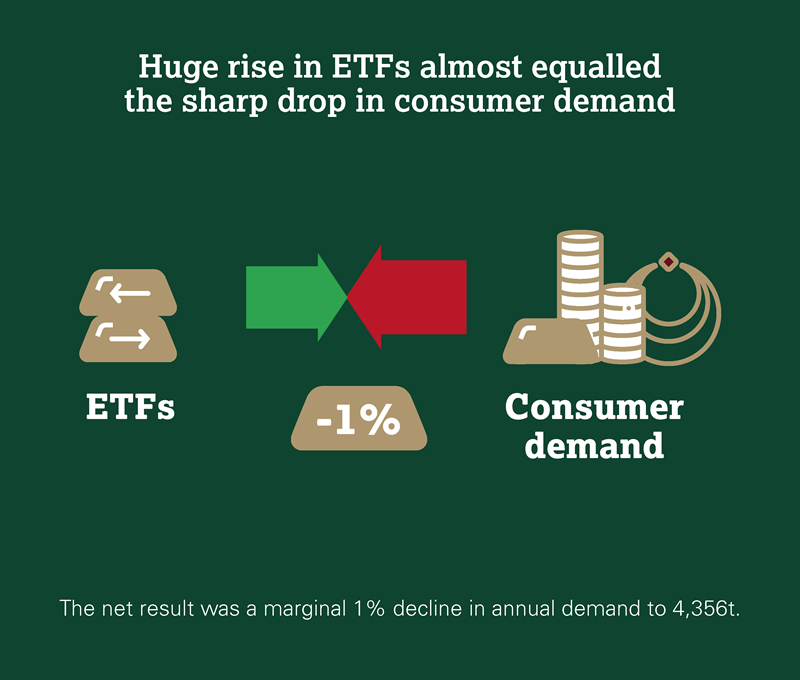 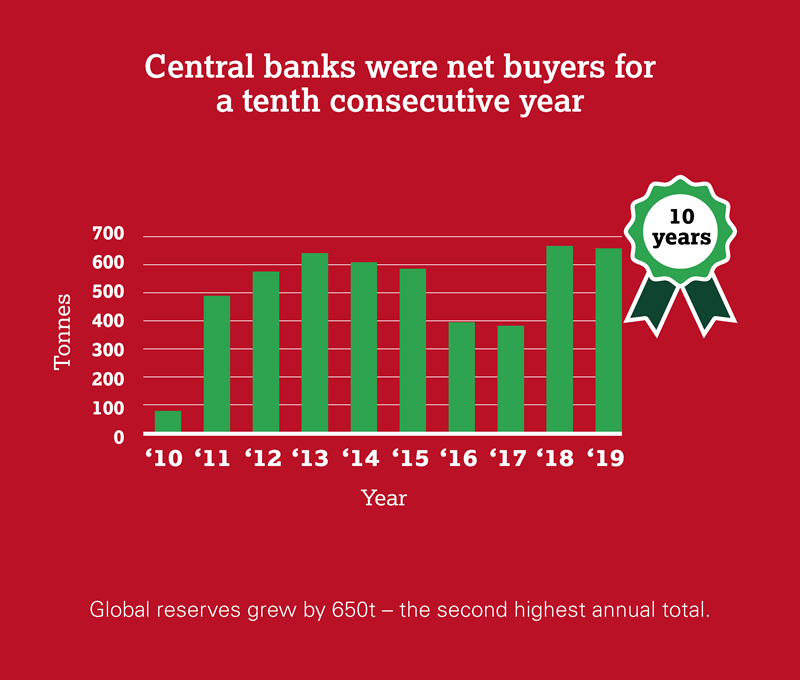 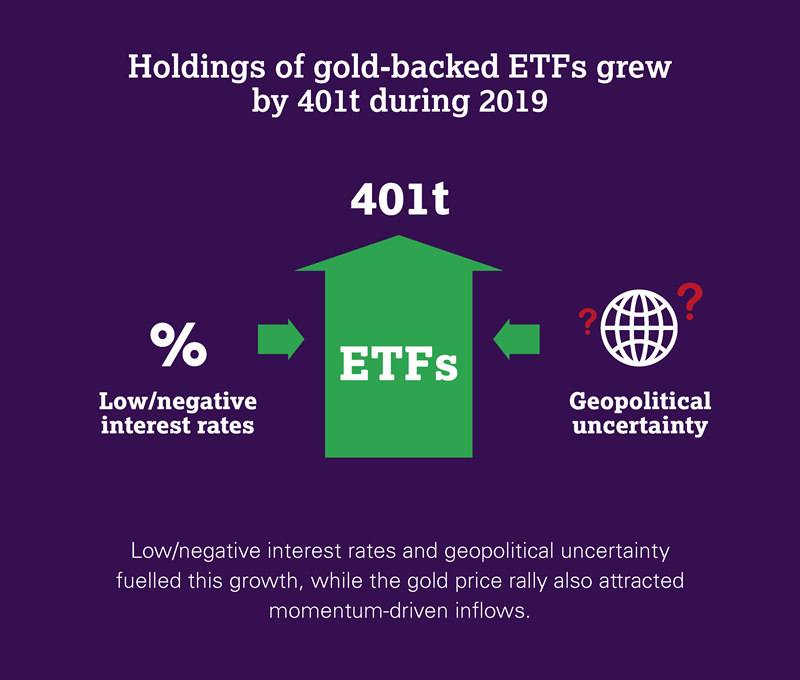 Total fourth quarter demand fell 19% y-o-y to 1,045.2t. Two main contributors to the y-o-y drop were jewellery and physical bar demand, both of which reacted to the elevated gold price. In US dollar value terms, the decline in Q4 demand was much shallower – down just 3% to US$49.7bn.

Inflows into global gold-backed ETFs and similar products pushed total holdings to a record year-end total of 2885.5t. Holdings grew by 401.1t over the year, with 26.8t added in Q4. Inflows were heavily concentrated in Q3 as the US dollar gold price rallied to a six-year high.

China and India held sway over global consumer demand. Together, the two gold consuming giants accounted for 80% of the y-o-y decline in Q4 jewellery and retail investment demand. High gold prices and a softer economic environment were the main culprits.

Total annual gold supply edged up 2% to 4,776.1t. An 11% jump in recycling was the main reason for the increase, as consumers capitalised on the sharp rise in the gold price in the second half of the year. Annual mine production was marginally lower at 3,463.7t – the first annual decline for more than 10 years.

The gold price averaged US$1,481/oz in Q4. This was the highest average price since Q1 2013. Although the price remained below the Q3 high, it was well supported. And gold priced in various currencies – including euros, Indian rupees and Turkish lira – hit their highest levels in history.

Any references to LBMA Gold Price are used with the permission of ICE Benchmark Administration Limited and have been provided for informational purposes only. ICE Benchmark Administration Limited accepts no liability or responsibility for the accuracy of the prices or the underlying product to which the prices may be referenced. All third-party content is the intellectual property of the respective third party and all rights are reserved to such party.

Reproduction or redistribution of any of this information is expressly prohibited without the prior written consent of World Gold Council or the appropriate intellectual property owners, except as specifically provided below.

Use of any statistics in this information is permitted for the purposes of review and commentary in line with fair industry practice, subject to the following pre-conditions: (i) only limited extracts may be used; and (ii) any use must be accompanied by a citation to World Gold Council and, where appropriate, to Metals Focus, Refinitiv GFMS, or other identified third party, as their source.

World Gold Council does not guarantee the accuracy or completeness of any information and does not accept responsibility for any losses or damages arising directly or indirectly from the use of this information.