Broad Markets – Stock markets were higher globally last week, except in China and EM, which fell 5% and 1.3% (US +1.5%, Europe: 0.5%).The stock market performance in China is likely linked to the comments made about the country’s economic stimulus plans. China said they would support the economy, but there are worries of a near-term pullback in support (policy-tightening fears) given the better than expected first quarter GDP results. The BoJ left rates unchanged, which was expected, but said it does not intend to raise rates before 2020, slightly changing expectations in-line with the US. The US reported much better expected 1st quarter GDP (3.2% annual pace), resulting the yields falling and the 2/10 curve flattening. The German 10-yr yield fell into negative territory again. Despite the stock market at all-time highs, bond markets are implying a 65% cut of a rate cut this year! Half of this probability implies a cut of 50bps. Commodities were lower by 1% last week, with oil down 1.1%. The pound is at a 10-week low vs the US dollar driven by reports that May’s talks with Brexit opposition leaders have stalled. The Fed reports its rate decision on Wednesday and there is no expected rate change. US/China trade discussion continue this week and US Treasury Secretary Mnuchin said enforcement mechanisms are “close to done.” Tech bellwethers Alphabet and Apple report this week.

ETF Flows: YTD gold-backed ETF flows are now negative by $141mn (0.14% of AUM) with all regions except Europe having outflows. Globally, gold-backed ETFs experienced outflows last week of US$845mn. Month-to-date, there are negative flows  (-US$2.0bn or 2% of assets) worldwide. Invesco Physical Gold ETC in the UK and Xetra in Germany have captured the most inflows with Europe but total flows in Europe are now negative on the month. 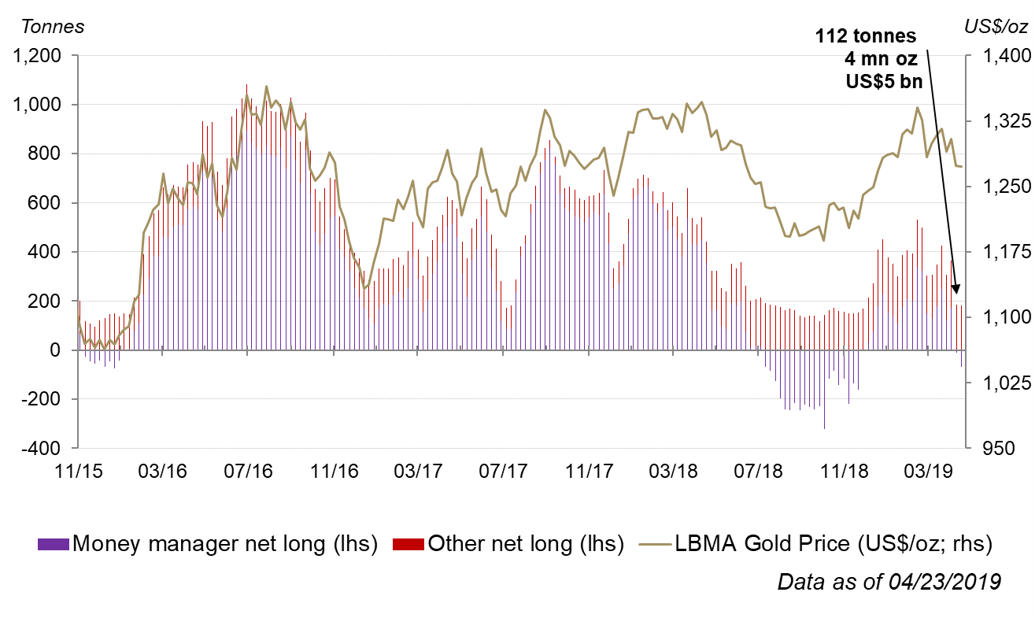 Liquidity: Volumes in the global gold market have decreased to US$109bn/day in April – approx. 13% down relative to March. COMEX net longs decreased last week from 173t to 112t, the lowest levels since 12/3/2018. Gold futures options open interest fell sharply last week, notably at the $1,300 level with notional going from ~$1tn to ~$500bn. 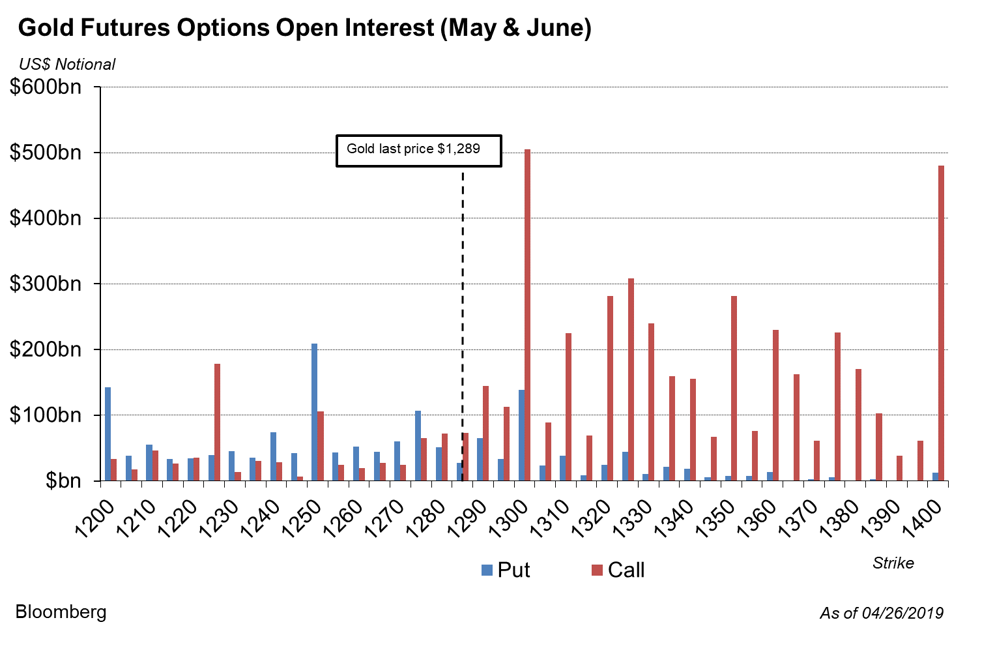 Options and volatility: Implied volatility across tenors remains in the single digit percentile over the past year between 8 and 9, despite the recent moves (increases in realized volatility) in gold prices and technical breaks. Put/call skew also remains relatively inexpensive despite the weakness in gold this month. The muted implied volatility and perceived risk in put skew may be due to the fact that gold is effectively flat for both the month and year.