The World Gold Council’s Gold Demand Trends report for Q2 2015 shows total demand was 915 tonnes (t), a fall of 12% compared to the same period last year, due mainly to a decline in demand from consumers in India and China. However, demand in Europe and the US grew, driven by a mixture of increasingly confident jewellery buyers and strong demand for bars and coins. Looking ahead, there are encouraging signs moving into what are traditionally the busiest quarters for gold buying in India and China.

Overall jewellery demand was down 14% to 513t, from 595t in 2014 due to falls in consumer spending in Asia. In China, slowing economic growth and a rallying stock market led to a 5% fall in demand to 174t. In India, the heavy unseasonal rains in Q1 and drought in Q2 impacted rural incomes and affected gold demand. In addition, a dearth of auspicious days for marriages in Q3 meant that wedding-related demand was unusually slow, leading to a fall in jewellery demand of 23% to 118t. Overall, if we look at the picture for the first half of this year in India, jewellery was down 3% to 268.8t from 276.1t (H1 2014). The US remained steady, with jewellery demand up for the sixth consecutive quarter by 2% (26t). In Europe demand was also up, with Germany up 7% and the UK and Spain both growing by 6%.

Global investment demand was down 11% to 179t from 200t in Q2 2014. India was the main driver of the fall, down 30% to 37t, due to uncertain price expectations and a buoyant stock market. This was countered by a rise in Chinese bar and coin demand, up 6% to 42t. In Europe, fears of a potential Greek exit from the eurozone saw retail investment in gold reach 47t, a rise of 19% compared to last year. The US also saw strong demand, with retail investment increasing by 7%. Of particular note was the huge burst of activity in June, when bullion coin sales by the US Mint hit a 17-month high.

Elsewhere, central banks continued to be strong buyers of gold. Net official sector purchases totalled 137t, with Russia and Kazakhstan the biggest purchasers. Although a year-on-year fall of 13%, buying increased by 11% when compared with the first quarter of this year. It is the 18th consecutive quarter where central banks were net purchasers of gold.

Total supply was down 5% to 1,033t, as an increase in mine production of 3% to 787t in Q2 2015 was offset by declining recycling levels - down 8% to 251t. The indication for H2 2015 is that mine production will slow as the gold mining industry continues to manage their costs and optimise operations in the face of challenging markets.

“It’s been a challenging market for gold this quarter, particularly in Asia, on the back of falls in India and China. The reverse is true for western jewellery markets, as increased economic confidence led to continued growth in consumer demand. It is  fair to say that investment demand for the quarter remained muted given the continuing recovery in the US economy and booming stock markets in India and China during the quarter.

Jewellery market prospects look healthier for the remainder of the year with the upcoming wedding and festival season in India. In addition, falls in the gold price have historically triggered buying in price sensitive markets and we are already seeing early indications of this across Asia and the Middle East. Conversely, sharp falls in Chinese stock markets have shaken the largely consumer investment base and we are seeing early indications of interest in buying gold again - all illustrating the unique self balancing nature of gold demand and the diverse drivers which underpin it.”

The Q2 2015 Gold Demand Trends report, which includes comprehensive data provided by Metals Focus, can be viewed here, and on our iOS and Android apps..  You can follow the World Gold Council on Twitter at @goldcouncil and Like on Facebook.

The World Gold Council is the market development organisation for the gold industry. Our purpose is to stimulate and sustain demand for gold, provide industry leadership, and be the global authority on the gold market. 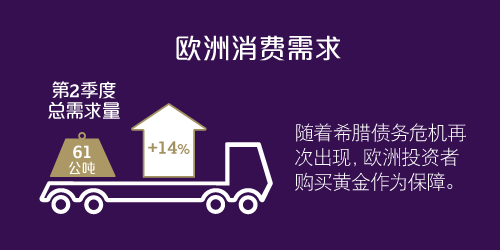