Gold demand had a soft start to 2018, reaching 973 tonnes (t), the lowest first quarter since 2008. This was largely caused by a fall in investment demand for gold bars and gold-backed exchange-traded funds (ETFs), as a subdued gold price environment hampered demand.

Gold demand had a soft start to 2018, reaching 973 tonnes (t), the lowest first quarter since 2008. This was largely caused by a fall in investment demand for gold bars and gold-backed exchange-traded funds (ETFs), as a subdued gold price environment hampered demand.

“Relatively solid global economic growth, coupled with the return of volatility in the capital markets in February, created a stable environment for gold in Q1 – while equity markets around the world came under pressure, the gold price rose.

Although demand was down year-on-year, we saw encouraging levels of jewellery demand in China, the US and Europe, continued growth in the technology sector, and steady inflows into ETFs, albeit at a slower pace than last year. Solid inflows into central bank reserves also highlight the ongoing relevance of gold as a strategic asset for institutional investors.”

The key findings included in the Gold Demand Trends Q1 2018 report are as follows:

The Gold Demand Trends Q1 2018 report, which includes comprehensive data provided by Metals Focus, can be viewed at http://www.gold.org/research/gold-demand-trends and on our iOS and Android apps. Gold Demand Trends data can also be explored using our interactive charting tool http://www.gold.org/data/gold-supply-and-demand/gold-market-chart.
You can follow the World Gold Council on Twitter at @goldcouncil and Like on Facebook.

The World Gold Council is the market development organisation for the gold industry. Our purpose is to stimulate and sustain demand for gold, provide industry leadership and be the global authority on the gold market. 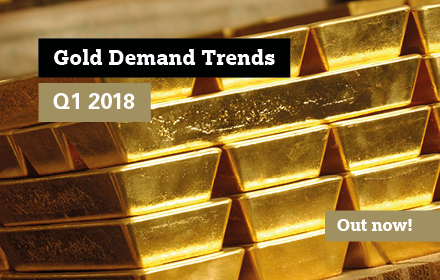