In August and September, the eyes of the world will turn to Brazil for the Rio 2016 Olympic and Paralympic Games and with it will come a natural focus on the competition for gold.

In August and September, the eyes of the world will turn to Brazil for the Rio 2016 Olympic and Paralympic Games and with it will come a natural focus on the competition for gold.

Why gold, silver and bronze?

These metals denote the first three Ages of Man in Greek mythology: The Golden Age, when men lived among the gods; the Silver Age, where youth lasted a hundred years; and the Bronze Age, the era of heroes.

A Rio 2016 gold medal will be worth approximately US$600. The medals made for the 2016 games have been produced by the Brazilian Mint, and are said to represent symbols of sustainability and accessibility, as well as sporting excellence.

The designs feature laurel leaves – a symbol of victory in ancient Greece – surrounding the Rio 2016 logo. The organisers have said this symbolises the relationship between the “strengths of Olympic heroes and the forces of nature.”

Each medal is 85mm in diameter and each medal; gold, silver and bronze, weighs 500g. They are the biggest and heaviest summer Olympic medals ever made. 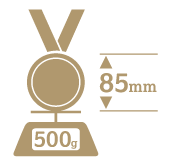 The gold medals meet sustainability criteria from extraction to refining, as well as meeting strict environmental and labour laws. 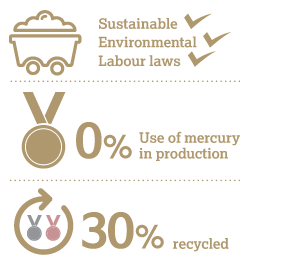 The gold in the gold medals has been produced completely without the use of mercury. In the silver and bronze medals, 30% of the material used is recycled.

The Paralympic Games medals feature a special innovation. They have a tiny device inside which makes a noise when the medal is shaken, allowing visually impaired athletes to know if they are gold, silver or bronze (gold has the loudest noise, bronze the quietest).

The custom of awarding gold, silver and bronze in sequence for the first three places dates back to the 1904 Summer Olympics in St. Louis, Missouri in the United States. Since then, the practice has continued and the International Olympic Committee (IOC) has retroactively assigned gold, silver and bronze medals to the three top placed athletes in each event of the Games. The last Olympic Games where medals were made entirely of gold was in 1912.

What’s in a gold medal today?

The International Olympic Committee stipulates that each gold medal must have a minimum silver content of 92.5% and at least six grams of gold. Consistent with the London 2012 Games, copper is again being used as an ingredient.
Half of the plastic in the ribbons, which will position the medals around athletes’ necks, comes from recycled bottles.