The strong gold price performance was a positive for investors and producers, and was symptomatic of a more profound shift in sentiment: a growing recognition of gold’s role as a wealth preservation and risk mitigation tool. This goes to the heart of our strategy to make gold a mainstream asset.

Over the past year we saw the launch of LMEprecious, developed with the London Metal Exchange, which is intended to improve price transparency and efficiency of transacting in the London wholesale market. Also, the emergence of a range of Shari’ah-compliant gold products, following the launch of the ground-breaking Shari’ah Standard on Gold in 2016, should help to open up the gold market further. More broadly, significant progress has been made in engaging pension funds and sovereign wealth funds to consider making allocations to gold.

Our unstinting efforts in China and India exemplify our ability to work constructively with policymakers, driving regulatory and legislative change that enables the long-term growth of the global gold market. During 2017, we gained commitment from the Indian government to make hallmarking mandatory and garnered broader stakeholder support for a gold spot exchange, which could have a significant effect on local price discovery and the entire ecosystem around physical deliveries.

In Russia, we have been working with stakeholders, looking at ways to bolster levels of private investment and a proposal to remove VAT on gold bars is now being considered by parliament.

2017 also marked our 30th anniversary. Over the years, there have been numerous milestones, which are laid out in this report, the most significant of which have been: the shift in gold demand from West to East, facilitated by policy changes and deregulation in China and India; the launch of GLD in 2004, which transformed the investment landscape for gold, and the change in the approach of central banks to deploying gold. While the Central Bank Gold Agreement in 1999 initially helped stabilise sales, more recently through our work on reserve asset programmes, we have seen central banks change from being sellers to net purchasers of gold. 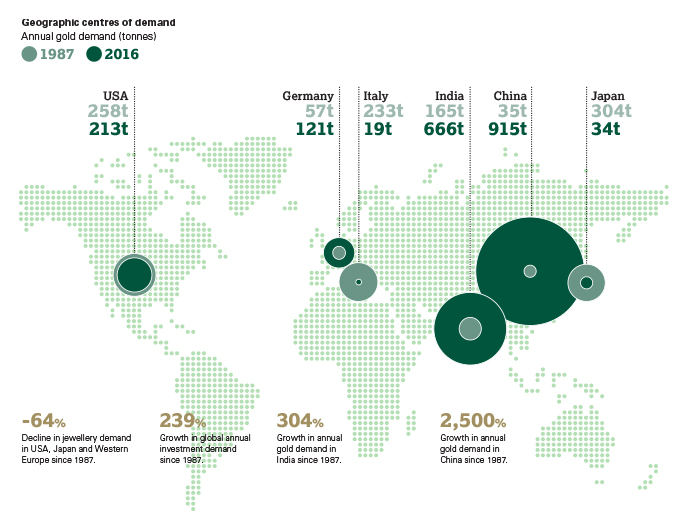 During the year we saw much discussion around cryptocurrencies and their relationship with gold. While we recognise why this comparison has been made, the two are fundamentally distinct assets, which appeal to different types of investors. While cryptocurrencies have been more of a speculative vehicle, our sense is that people who choose to invest in gold are looking to hold the asset for the long term to help protect their wealth and diversify their risk profile.

That said, we strongly believe that disruptive technologies, such as Blockchain, offer a significant opportunity for both us and the gold market. We are seeing more and more digitally based investment platforms backed by physical gold and expect this trend to accelerate.

In 2018, we are hosting our first annual investment conference, at which we will be bringing together a host of leading minds to address key topics being debated at the moment, such as crypto-assets and rising political risk. We’ll also be addressing the growing role of Environmental, Social and Governance issues in long-term investment decision making.

It is vital that we continue to represent the leading and most forward-thinking gold mining companies worldwide. We strive to ensure there is a healthy market for gold for all stakeholders and, where appropriate, we are also the instrument for the industry to speak with authority, influence and one voice. As we head into 2018, we are in the midst of exciting times and I’m looking forward to what lies ahead.