Gold’s unexpected role in the fight against antimicrobial resistance

Gold’s unexpected role in the fight against antimicrobial resistance

In 2016, the UK government published a wide-ranging report into the growing problem of antimicrobial resistance (AMR) around the world1. The results were stark; according to the research 10 million deaths will be attributable to AMR annually by 2050. To put this into perspective, this is greater than the number of deaths caused by cancer in 2016. 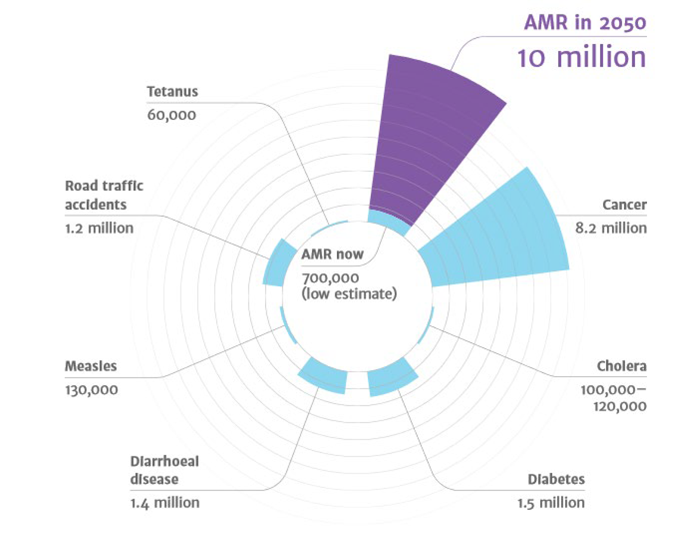 This week saw the annual gathering of ECCMID (European Congress of Clinical Microbiology & Infectious Diseases), one of the world’s largest infectious disease conferences, and AMR was never far from any conversation. The problem is large and complex, as are the solutions we need to identify in the coming years to turn the tide against AMR. One key part of the puzzle is making sure frontline staff have access to reliable and rapid diagnostics; this ensures that conditions are properly diagnosed, which in turn allows the efficient management of antibiotics and post-infection risk. Gold nanoparticles have traditionally been at the heart of many of these medical diagnostic test kits, and ongoing R&D has improved their performance and seen them remain central to new tests. For example, Abbott Laboratories recently launched a gold nanoparticle rapid test for Campylobacter, a leading cause of bacterial diarrhoea responsible for hundreds of thousands of deaths every year.

Gold also potentially has a role to play in not only diagnosing disease, but treating it. Auranofin is gold-based drug developed and FDA-approved in the 1980s to treat Rheumatoid Arthritis, but recent years has seen its resurgence as a potential treatment for various infectious diseases. A phase II trial is currently ongoing to test its effectiveness against amoebic dysentery2, and a phase I trial is evaluating the drug against tuberculosis3.

AMR is a complex issue, and to successfully tackle it will require many advances in science and policy worldwide. However, it’s clear that gold will continue to play a critical role in this ongoing fight.