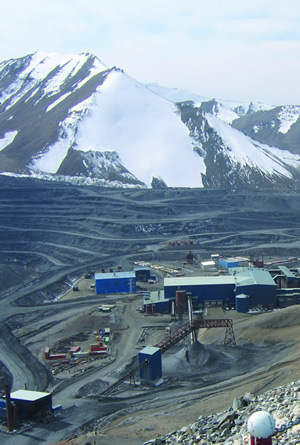 Centerra Gold’s Kumtor mine, a large-scale mining operation in the Kyrgyz Republic, is a significant consumer of fuel and electricity.

Fuel represents over 20% of the mine’s overall commodity and service related purchases. Kumtor’s most energy intensive operation is its mill, representing approximately 75% of the mine’s electricity consumption.

The Kyrgyz Republic is a leading producer and exporter of hydroelectric energy in the Central Asia region, thanks to its mountainous terrain and abundant water resources. Hydropower generates more than 70% of the country’s electricity.

The major source of power supplied to Kumtor is from the Toktogul Reservoir located on the Naryn River. This means that the mine’s specific GHG emission footprint resultant from electricity is relatively low. Centerra Gold aims to further reduce GHG intensity by lowering its energy consumption and increasing energy efficiency.

Where and when feasible, the company is switching from diesel generators to grid electricity, thus gaining the greatest value from its initiatives to reduce emissions. Its actions lower both the mine’s costs and GHG footprint.