In his book The Curse of Cash, leading economist Ken Rogoff suggests that excessive reliance on paper money is responsible for ills ranging from tax evasion to terrorism. He also believes that monetary policy would be more effective in a largely cashless society. Cryptocurrencies are not an effective replacement for paper money, he says, but gold’s role is likely to increase as cash fades from view.

First there were cheques, then debit and credit cards, then electronic transfers and, most recently, smartphone applications. With each innovation, cash has become less relevant. At the turn of the century for example, 35% of all legal transactions by value were conducted in cash in the United States. Today, that figure has declined to 7% and it is expected to fall to around 2% in the next decade.

At the same time, however, the supply of paper money keeps rising, as Ken Rogoff, Professor of Economics and Professor of Public Policy at Harvard University, explains. “Cash is totally in decline. But supply keeps going up. It is almost all in large denomination notes and it is mainly used for tax evasion, regulatory evasion and of course crime.

“Eventually these notes will be so little used in legal transactions that people won’t be able to launder them anymore and then the central banks will just have to buy them back. But I think the process should be accelerated,” he adds.

Fair taxation is one of the principal reasons that Rogoff cites in favour of a largely cashless society. “The US Internal Revenue Service estimates that around 15% of all taxes owed are never collected. Cash-intensive businesses account for about half of those uncollected revenues. In Europe, the figures are much higher, particularly in Italy, Spain, Greece and Germany. And the problem is that this makes taxes higher for the rest of us,” he says.

In the US alone, the sums involved are substantial – around US$500 billion (bn) at a federal level and a further US$200–300bn at local and state level, according to Rogoff.

“The Federal Reserve makes around US$80bn from printing cash but if it could recoup even a portion of those unpaid taxes, that would more than compensate for the loss of printing revenues. And in a modern digital world, central banks will have plenty of opportunities to make money – as trusted parties, clearing houses of last resort and such like,” Rogoff suggests.

“Also, if we kept smaller bills in the United States, which account for 5–10% of total bills in circulation, the Fed would still be making up to US$8bn a year. And the chances are that if we got rid of larger notes, the number of smaller notes would rise a lot – so central banks would continue as profit centres, even if we became largely cashless,” he adds.

Rogoff suggests too that if the only cash in circulation comprised small notes and coins, central banks would be more able to introduce negative interest rates, if and when appropriate, because savers would not have much option but to keep most of their money in the bank. This could have widespread economic implications. “Monetary policy is an essential fine-tuning tool. Fiscal policy is obviously critical too but it’s highly political – and it’s always going to be that way. Quantitative easing is mostly smoke and mirrors. So being able to introduce effective negative interest rates is very important, at certain times. And it would be much easier to do in a cashless economy,” he says.

There is an incredible disconnect between the fact that cash is disappearing in legal, tax-compliant transactions but exploding in terms of how much central banks are printing.

Croesus, King of Lydia from 595–547 BC, perfected refining techniques that standardised the purity of his coinage, which meant his coins rapidly became the world’s first internationally accepted currency. 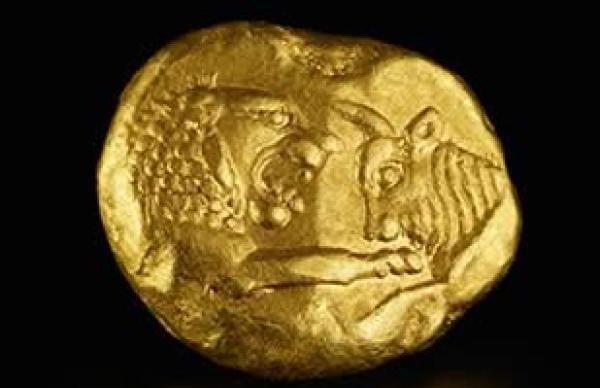 Some people believe that cryptocurrencies could – and possibly should – replace cash over time. They are digital, they refute the need for banks and they are virtually anonymous. Rogoff is highly sceptical, however.

“The idea that a few geniuses in Silicon Valley can create a world that governments can’t touch is stupefyingly naïve. And the idea that cryptocurrencies will replace the dollar is equally foolish,” he says.

Rogoff suggests that if cryptocurrencies became more pervasive, they could limit the effectiveness of fiscal policy and, ultimately, monetary policy. But he does not believe this will ever happen. “Cryptocurrencies are not a currency. And they will be regulated. We see regulation starting to happen in the UK and the US and it will keep ramping up. The only reason it hasn’t done so already is because cryptocurrencies just don’t matter that much.”

Rogoff suggests that regulation is relatively straightforward: governments simply need to limit the outlets where Bitcoin and its ilk can be spent. “Most people want to be able to use it in a store or take it into a bank so that’s the way to limit its development,” he says.

This does not mean digital currencies have limited potential – just that the systems behind them are likely to be rather different in future. “Money supply will increasingly be digital. In 20 years’ time, pretty much all the central banks will be issuing digital retail currencies of a sort and you should be able to hold at least a digital savings account with your central bank.

Even as cash becomes a dwindling resource and regulation changes the nature of cryptocurrencies, Rogoff believes that gold will retain and almost certainly increase its value.

“If you look at the history of currency, gold has a unique role and I don’t think it’s accidental. Some people say that if gold hadn’t been selected as a currency thousands of years ago, it would not have a role today. I don’t agree. Gold has a lot of useful properties and unique features so I don’t think its status is in any way accidental. It’s a monetary asset and I think if you replayed history another way, you would come out with gold again,” he says.

“As we have less and less paper currency, there will still be a need to store wealth, to have privacy and to carry out transactions between parties who don’t trust one another – gold fills that role. It’s probably the best substitute for paper currency so it’s hard to imagine its transaction value won’t go up over time. And there are all kinds of uses for gold in new technology that nobody even thought of years ago. So overall, it’s hard to see gold’s role diminishing,” he adds.

In addition to gold being a store of wealth, Rogoff takes the view that it is a valuable long-term investment too – both as a diversification- and risk-mitigation tool.

He is particularly concerned about the amount of gold held by emerging market central banks, suggesting they should increase their gold reserves by several percentage points.

“Emerging market central banks should hold fewer dollars and more gold as a way of diversifying their portfolio. It’s a simple question of diversification. At the moment, most emerging market central banks hold 1–2% of their reserves in gold, with 70–80% in dollars and the rest in euros and other currencies. I think a 5% allocation seems a natural position to take as part of an effective diversification policy – although it could be higher. After all, the US share of the global economy is shrinking, power is being centralised and we don’t know what the future holds,” he says.

Rogoff’s rationale is clear: the US dollar is increasingly dominant on the global stage yet US deficits are increasing and may well continue to do so.

“We already have trillion-dollar deficits right now and they’re manageable. But if corporate, local, state and federal debt is allowed to grow, there will come a point when the US gets stressed. And if deficits have doubled or tripled by then, inflation is bound to ensue. Our system is not built for high inflation so it would cause incredible financial turmoil and stress. It may take decades but these things always tend to blow up at some point. And, as the US economy becomes proportionately smaller and the dollarisation of the global economy becomes larger, the equilibrium becomes increasingly fragile,” he adds.

Against this backdrop, the rationale for holding gold becomes even clearer. “The point is, Treasury bills are not a riskless asset. They may be for two to three years but not necessarily for the long term, so if you want to build a 40-year plan, you should have some diversification. Let’s face it – if you’re a hedge fund manager and there is a 3–4% chance you will get wiped out and a 96% chance you will get very rich, that’s a bet worth taking. If you’re a country, that’s not such a smart bet,” Rogoff explains.

As a hedge, gold has enormous value. So it makes sense for HNW individuals and even for some pension funds to hold a small percentage of their assets in gold.

He believes that institutional investors and wealthy individuals should also allocate a proportion of their portfolio to gold. “As a hedge, gold has enormous value. You never know what’s going to happen and when something really bad happens, gold is probably going to be worth a lot to you. So it makes sense for high net worth (HNW) individuals and perhaps even for some pension funds to hold a small percentage of their assets in gold,” he says.

Looking ahead, Rogoff suggests that gold is also likely to increase in value as its global role evolves. “I suspect gold’s value will go up in real terms. I think the trend towards digital currencies will strengthen the value of gold. As emerging markets expand and trust the US less, that will also strengthen the value of gold. So, as part of a larger portfolio allocation, it seems very reasonable to me,” he concludes.